So, after the first day of being sick, where I wasn't really able to focus my eyes on anything much beyond the inside of my eyelids, I decided to watch discs 2 and 3 of 30 Rock Season One that I had on loan from BigPond.

Between erratic television scheduling and cracked discs, I've had a bit of difficulty watching 30 Rock in any kind of sustained way over its four seasons, and if that hasn't been enough for me to just give in and buy it, then it's finally been due to the program itself, or at least from what I've managed to watch of it this weekend, that henceforth I will be on the look out to buy 30 Rock, preferably on sale.

I haven't mentioned it here before, but this semester I'm convening a subject in a television degree, and there are so many moments in 30 Rock that just speak to the massive changes that television as a medium has undergone in the past decade or so that I think it would be remiss of me, as a television scholar, not to own it.

Just off the top of my head:

Jack Donaghy is the Head of West Coast Television and Microwave Programming for GE .

Liz Lemon explains to a colleague of TGS with Tracy Jordan that 'This is not HBO, it's TV'.

In one episode a webisode is featured. It consists of a character's entrance to a room and two spoken lines before the credits--longer than the webisode--roll.

There, in three brief instances, you have commentary on the industrial context of contemporary television, as well as aesthetic and technological developments. Brilliant.

Finally, I can't overlook the irony of my desire to buy 30 Rock on DVD.

The DVD has contributed to changes in television that have brought about this current crop of extraordinary television narratives; it's encouraged the production of texts that can bear repeat viewing.

So, that's why I'll buy the DVDs of this TV show, because I don't want to miss a single self-referential moment of this television sit-com about the production of a live television variety show. And then I'll want to watch every moment again.
Posted by Kirsty at 8:08 pm No comments:

I woke up this morning with a portentous soreness in my left inner ear. I took myself off to work thinking that the sooner I got some cold and flu fighting ingredients into me the better I'd be.

En route to change buses, I made a bee-line for a convenience store and bought something called breakfast juice that promised me 4 times the recommended daily intake of Vitamin C . Later I dropped into a chemist and bought some tablets which promised to shorten the life of my cold or flu or whatever it was that was rapidly spreading to give me a sore throat too.

Perhaps if I'd had the opportunity to rest today, I would've nipped this in the bud, but I had to teach and now I'm sniffling and sneezing and my teeth ache too. It's as if my body knew the Easter break was mere hours away and thought I wouldn't have enough to fill my days with.

Dear Body, I really do have quite enough to do already to fill in the next week or so. I have marking and reading and lecture planning and writing and, you know, general organisational stuff. Having to lie in bed and whimper between violent sneezes will really throw out my schedule. Yours, etc
Posted by Kirsty at 10:08 pm No comments:

Hey. It's been a slow old start to this blog this year hasn't it? Although I'm not sure I can lay claim to starting anything quite yet...

I've been meaning to drop in for a while, but yeah, things were a bit much at the end of last year and I really did take January and much of February to just get back on an even keel.
Extra medication helped. Sitting my friend's cat while she's overseas has helped. The start of the semester and gainful employment and an income has made things better too. 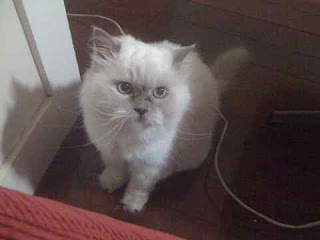 I won't attempt to fill you in on everything that's happened since I last posted--if you're really interested, I continued to capture the incessant minutiae of my existence on Twitter. I was just reminded tonight, when I attended a new book club that I've joined, that I never really intended to stop blogging.

At the book group we discussed Julie & Julia, the book, but also, inevitably, the film, and then we talked about bone marrow and artichokes and aspic and the apparent pleasures of vivisecting, if not killing lobsters and then, eventually, blogging.

So This Is Christmas

It's been a bit dreary on this blog lately I know, and I'm afraid things aren't going to improve any time soon as far as I can tell.

I'm still not really having a good time with things. It's got to the point where my doctor has given me a medical certificate to present to Centrelink declaring that I am unfit for work for the next three months. She also advised me to take 3 weeks off immediately.

The certificate will give me some respite from having to look for 10 jobs a fortnight. I'll still look for work, I have to, but as working on just one application for the past two days has made me realise, I am genuinely not capable of one per day. That application utterly exhausted me. I wanted to sleep forever after I submitted it. And then I wanted to burst into tears.

The payment that I will eventually receive from Centrelink won't be enough to even pay my rent. I worked out that even with the bits of research work I might get I'll be able, perhaps, to have around $100 per fortnight left over.

Obviously I have to find someone to move into the room that is currently my study, so I can eke some more room into my budget. I'm not worried about giving up the room, but since my last disastrous attempt to share accommodation, I'm gun-shy about potential flatmates. Repeat to self: 'Your last flat mate was not representative of people in general'. I'll need to prepare a good list of questions for interviewing applicants. I'll need to remind myself not to dismiss my intuition when a passing comment indicates potential incompatibility.

***
On Christmas eve, I'm going to a friend's place for dinner. I'll enjoy that.

For Christmas, I'm spending the day with my sisters and niece. I'm looking forward to that.

Then between Christmas and New Year, I'm going to Coochiemudlo for a couple of nights to visit some friends. I am dying for that.

In the first week of the year I'm going to use the free tickets to a day session at the Brisbane International that someone I know from Twitter so very generously sent my way. That will be fun, as I've never been to a professional tennis match before.

So, things aren't wonderful--I am scarily broke--but there'll be a few lovely moments with some friends and family that, hopefully, will go some way to restoring me for the year ahead.

Often, when people are discussing the poverty of postgraduate students, special mention is always made of how particularly difficult it is for those with families to support.

I don't want to deny this. Yes, it would be difficult, impossible, to support a family of even one child, with only a scholarship for income.

But what maddens me about this often-repeated assertion is that it imposes a hierarchy of need, where single people are apparently less in need of financial support, any other special consideration or, indeed, compassion, than those who have children and partners.

I'm entering difficult territory here. It's not my intention to contribute to the op-ed-fuelled battle between parents and single women (for it is always single women who are problematic). I am not against children or the desire to have children or those who choose to have children. One of my favourite persons is, in fact, a child, for whom I would do almost anything. ☺

What upsets me, however, is the assumption that it's easier for single people to get by in conditions of poverty or with a low income. Actually, it's difficult for me to know whether it is easier or not for single people, since I've never been a parent. Let me attempt then, to step outside of what seems to be a particularly unhelpful binary opposition between those who are coupled (with children) and those who are not, and tell you about my experience of postgraduate poverty.

The first thing is that poverty is not simply about money, it's as much about isolation and a lack of social support. In fact, this might be the only item I go into right now, for I am consumed with it.

I have a family into which I was born, but it's a difficult one. Sometimes I've had the opportunity to witness the various kindness that friends' families do for them and I'm astonished at such generous, unreserved giving. It's not simply material gifts I'm thinking of here but a generosity of spirit which reassures my friends that if they were in any trouble they could call on their family and be guaranteed support in all its forms.

I don't have this grounding and so it should scarcely be surprising that I haven't been able to create such a family for myself. 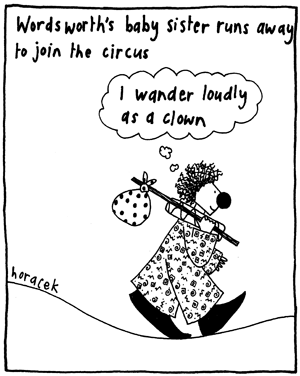 This is my observation: it's hard to do a postgraduate degree when you don't have anyone to share the burdens, financial and emotional, of everyday life.
Posted by Kirsty at 10:47 am 3 comments: