I was side-tracked from my original intention on my last post, which was to tell you about all the exciting social outings I’ve been on lately. But then I got to relating one of my more recent traumatic experiences as part of letting you know about the conversation over dinner and before I knew it I’d written over a thousand words and hadn’t even made it to the second event of the five I had planned to tell you about.

Does this happen to other people? Do you stick to what you intend to write about? Or do you get all Virginia Woolf and attempt to write down every thought that occurs to you? On the one hand I think I should resist writing down everything that pops into my head; there’s something messy about revealing details of my life and those of my acquaintances in public—especially when the portraits of others are not always flattering. But then there’s something that happens when I start writing: thoughts are sparked and tangents beckon, or as Dostoyevsky writes in Notes from Underground, ‘I practise thinking, and consequently each of my primary causes pulls along another, even more primary, it its wake, and so on ad infinitum’. In Notes this line explains why the character isn’t a man of action—he is unable to find a foundation upon which to act with conviction—and it’s really no surprise to me that there are times I relate to his sentiments. In terms of this blog, I can only apologise for the frustration that might be caused by the ‘soap-bubble, and inertia’ of such constant waywardness. Perhaps you’ll never find out about the fifth event as it moves farther away with each thought... 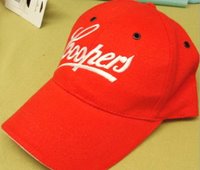 The second event I went to last week was the going away drinks for Dr P. I arrived half an hour after I’d intended to, because I’d been occupied by posting a long-winded comment to another blog. I entered the staff club and marvelled that even a club for academics has its resident barflies who turn as synchronous swimmers to ogle your breasts as you walk through the door (!). Before I joined Dr P’s table I decided to get a beer and chose to try the new Coopers’ Mild Ale. I felt a small head spin after only two pots (that’s midis for southerners). I thought it was a low alcohol beer, which is why I chose it. If it is, here’s incontrovertible evidence that I need to get out more. When I bought the first beer the bar tender gave me a ticket that told me that I’d won prize number 2. Prize number 2 was a hat with Coopers embroidered on the front. I’m not a big fan of merchandise advertising alcohol, but it’s always nice to win something, and I was assured by my colleagues that a Coopers logo was infinitely better than one from Coca-Cola. L told of how the Coopers’ company provided free water to the local residents near their factory in South Australia. Dr B said something about an attempted take-over of the company, of which I confess I was ignorant. Later the logo was used as a prop to explain metonym to a fellow tutor (You know you wish you were present at that scintillating conversation!) I explained how I would wear it while hanging out my washing in an act of defiance against my neighbours who roar up and down the dirt driveway past my door in their Ute with a Fourex logo on it. I can only assume they have something to do with that factory over the way—would you hang a Fourex logo from your balcony for any other reason? I told Dr P how much I enjoyed working with her. She said I couldn’t say that with as many students as I’d had. She’s worried that she won’t be able to get the Sirena brand of tuna in London. I said she could probably just pop across to Italy and get it as often as she wanted. Then it was time to say farewell. 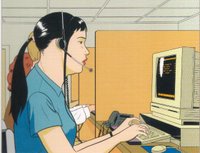 I caught the bus to the city and then on to the Valley, because I’d also been invited to a get together with people from the call-centre I’d worked at for nearly 5 years. Again, I was late, but I’d warned them that I would be because I couldn’t miss Dr P’s farewell. I was starving by the time I got to the restaurant, another Thai establishment, but this one was named without deference to the sensibilities of English speakers, Thai Wi-Rat. It’s a tiny little restaurant in the Chinatown Mall, just up from the call-centre. I’d managed to talk my call-centre colleagues into going there once because I had read about it in Gourmet Traveller, now it seems to be a regular haunt. The food at My Thai was good, but the food at Thai Wi-Rat is sublime. I am partial to one of the ‘Special Dishes’ which is the Thai Wi-Rat salad. I had no idea what ‘fish mow’ was when I first ordered it, but it seems to be a kind of crunchy fried ingredient that adds a unique texture to a calamari and julienne vegetable salad dressed in chilli, lime, fish sauce and other things I’m sure. My former colleagues, or as we called ourselves, the Directories’ Divas (male or female), were happy to continue their conversations while I ate my late order. Not all of the group still work at the call-centre, yet it’s almost like we’ve never been away from each other. If you’ve never worked in a call-centre then let me assure you the work and conditions are deplorable. There must be some conscientious call-centre operators out there, who look after their staff, but the company we work/ed for is not one of them. When I finished working there in February, the carpet was worn through in various places and apparently that’s still the case. In a job where customers feel entitled to scream abuse at you over the phone, the support of the employer becomes especially important, but it was non-existent. Add to that the constant monitoring of call times and toilet breaks, well, you shouldn’t be surprised that directories and messaging operators want you to answer their questions as efficiently as possible, and don’t really have the time to chat pleasantly—their jobs are constantly on the line. When I worked there, I was sick all the time, whether from the close proximity to other people in an air-conditioned building or stress-related immune deficiency. I haven’t had a single cold since I left, which I find extraordinary. The job and the environment were bad for me. But, oh the people; that a group of us is getting together after at least half the table have taken up other employment opportunities is, I think, telling. People work in call-centres for all sorts of reasons—not because they’re stupid as several callers told me over the years—and they come from all sorts of backgrounds. There are musicians, former small-business owners, consultants, tertiary students—undergraduate and postgraduate, carers, women who’ve returned to the workforce after decades-long absences, people who’ve always worked in call-centres and so on. They’re really some of the nicest, most genuine people I’ve ever had the good-fortune to work with. T especially is hilarious and generous, with a ribald humour that only she can get away with (the hand gestures alone would have anyone else out the door). She transformed that call-centre when she arrived through the sheer force of her personality. I’m sure everyone there misses her terribly. She’s a fellow Far North Queenslander so we go around putting ‘ay’ on the ends of our sentences and telling tales of growing up with tropical fruit at our feet or of our deprived existences with only the ABC and one commercial television channel for entertainment. I feel so relaxed around all of the Divas, past and present. And for a foodie, such as myself, I love the fact that everyone of them is as equally committed to eating dessert when they’re out as I am. Before I’d arrived, there’d clearly been a very earnest discussion about going somewhere for apple pie afterwards. So off we went, over to the Brunswick Street Mall, where pastries were enthusiastically ingested by all.
Posted by Kirsty at 1:13 pm