I began the new year like most people, I imagine, toasting friends with champagne and watching a fireworks display. After the last of the pyrotechnics had faded into smoke someone asked if anyone had made a new year’s resolution. One friend joked that she was already perfect and so had nothing to resolve. I said I hadn’t made any resolutions, reasoning that I didn’t want to burden myself with expectations that I would most likely fail to fulfil. M admitted that her resolution this year was to be happy, which provoked a question from the group of academic types gathered as to what precisely would enable the achievement of that state for her. I’m afraid I can’t recall the details of M’s reply; I suppose I was distracted by my own thoughts about happiness. I’ve always been intrigued by Nietzsche’s questioning of the primacy of happiness as the most apparently desirable state of being.

‘Are we not, with this tremendous objective of obliterating all the sharp edges of life, well on the way to turning mankind into sand? Sand! Small, soft,
round, unending sand! Is that your ideal, you heralds of the sympathetic affections?’ (Daybreak 174)

Without succumbing entirely into the soft sands of happiness, I have spent some time over the last week wriggling my toes on the beach: 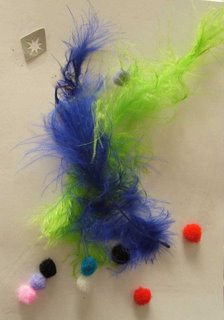 On Christmas Eve, my three year old niece, H, whispered to her mother that she wanted to give the first of the cards she had made to Auntie K. I watched her quiver with excitement when she opened the umbrella I gave her for Christmas. In the absence of actual rain, I was drawn in to making pretend raindrops to pitter patter down upon her. I was surprised when H whole-heartedly ate the Walnut and Brandy Chocolate Cake, persisting even when the bitter taste of the walnuts lingered after the first mouthful. Then I remembered her penchant for eating fresh lemons and limes. She knows she only has to enquire, ‘What taste is that Auntie K?’ for me to waver over the (arbitrary?) distinction between foods for adults and those appropriate for children. When I hugged her good-bye, her arms lingered on my shoulders and she sat back and just looked at me with a secret smile on her face, before she said, very formally, ‘I would like to see you again, soon’.

On Christmas Day, I made blueberry pancakes for my sister, V, her fiancé, P, and myself. We ate them with maple syrup, ice-cream and strips of bacon. We drank coffee and Chandon Sparkling Wine that I had bought in the Yarra Valley a year ago. Later we spent several hours in the spa. V explained the physiology of the effects of drinking champagne in a spa. The blood truly did vacate my head and gathered in my extremities producing a very pleasant state, suitable only for lolling the afternoon away.

I received some lovely presents from friends and family (and myself in the Boxing Day sales!)

On the 27th of December I finished reading The Book Thief. I cried the morning I ended this wonderful book. In the evening, I had dinner with a friend visiting from Tasmania. R used to be my neighbour. In fact she alerted me to the vacancy at the flats where she lived first and I subsequently moved in. At the time it was a bit like being distant flatmates, living next door to one another and going out for cheap dinners up the street. We revisited an old haunt and five years just slipped away.

The next day I started Life of Pi. One of the review quotes promised that it would make me believe in God. I acquired a new phrase: ‘Jesus, Mary, Muhammad and Vishnu’. I didn’t agree with Pi’s stance on agnosticism:

It is not atheists who get stuck in my craw, but agnostics. Doubt is useful for a while. We must all pass through the garden of Gesthamane. If Christ played with doubt, so must we. ... But we must move on. To choose doubt as a philosophy of life is akin to choosing immobility as a means of transportation.

Later Pi imagines the different responses of the atheist and the agnostic to the moment of death:

I can well imagine an atheist’s last words: “White, white! L-L-Love! My
God!”—and the deathbed leap of faith. Whereas the agnostic, if he stays true to his reasonable self, if he stays beholden to dry, yeastless factuality, might
try to explain the warm light bathing him by saying, “Possibly a f-f-failing
oxygenation of the b-b-brain,’ and to the very end, lack imagination and miss
the better story.

Perhaps the first quote explains why I walk; and I suppose that public transport could sometimes be described as immobile. I wouldn’t, however, characterise doubt as static. I think doubt is the opposite of stasis. Doubt is a state of never arriving; surely it’s resting after the arrival at an imagined certainty that produces inactivity?

I don’t really wish to argue the point of that last sentence. I don’t want to reproduce Pi’s (Martel’s?) binary in a mirror image, valorising doubt above faith instead. I’m not against faith; I believe in the concept of God to the extent that as an idea s/he has an affect on the way people live and act. I’m not just talking about conflicts between faiths that might be pointed to as a factor in wars , but a whole range of human thought and action. I would reject some aspects of ‘God’, but there are others that I think are beneficial, not only to individuals who believe in God/s, but also to those who don’t believe or who have doubts.

On the question of stasis, not even Pi is entirely against attributing value to immobility, admittedly as a temporary state. After his ship-wreck and castaway ordeal, when he goes on to live in Canada, he studies the thyroid gland of the three toed sloth whose ‘only real habit is indolence’. The sloth is a comfort to his shattered soul. Perhaps I am being too literal in my identification of stasis here, but there is another moment where Pi comments that:

Christianity is a religion in a rush. Look at the world created in seven days. Even on a symbolic level, that’s creation in a frenzy. To one born in a religion where the battle for a single soul can be a relay race run over many centuries, with innumerable generations passing along the baton, the quick resolution of Christianity has a dizzying effect. If Hinduism flows placidly like the Ganges, then Christianity bustles like Toronto at rush hour. It is a religion as swift as a swallow, as urgent as an ambulance. It turns on a dime, expresses itself in the instant. In a moment you are lost or saved.

I suppose the purpose of highlighting these examples of indolence or positive stasis is to question Pi’s otherwise negative characterisation of stasis as necessarily inferior to movement. In my Master’s thesis I wrote in the chapter on my methodological approach about the ‘stasis induced by ethical quandary’. While I was living through that stasis it was an awful, awful time but in a strange way it was a productive kind of immobility (Nietzsche would probably approve of my pain).

The other aspect of Pi’s (Martel’s?) thoughts that I take issue with is his assertion that agnostics are ‘beholden to ... yeastless factuality’. Perhaps I’m misinterpreting what he means by agnosticism here. In the popular sense, isn’t agnosticism uncertainty about the existence of God/s. Not knowing seems to me to offer countless possibilities for the imagination. To admit honestly not to know about whether God exists surely allows not only the deathbed possibility of ‘failing oxygenation of the brain’ but the equal possibility of the discover of love and faith, and a whole lot more But if agnosticism is to only believe in that which is materially verifiable then maybe Pi is right to decry a preoccupation with facts? Is there a place to express doubt about the existence of God/s yet still enjoy a good story? Surely there are whole realms of imagination that are precluded by both agnosticism and faith (and atheism, for that matter) that offer boundless possibilities for the imagination?

I fear this has all been too much philosophy so early in the new year...

Happy New Year! Whether that entails spending time lolling on the beach or being buffeted by the winds and waves of adversity in order to become a ‘higher person’—I will do both—I wish you well for the year ahead.
Posted by Kirsty at 3:39 pm