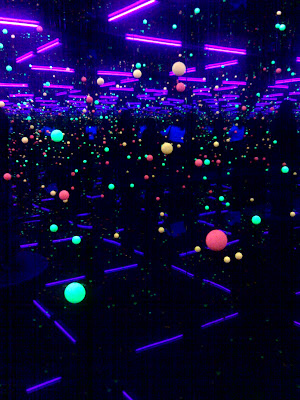 This is a photograph of me and one of my Sarsaparilla colleagues, David, who also has his own blog, Lorraine Crescent. We’re standing inside Soul Under The Moon an installation by Japanese artist,Yayoi Kusama, which is part of the Fifth Asia-Pacific Triennial of Contemporary Art, now showing at the newly opened Gallery of Modern Art in Brisbane until May.

I’m the one in the glowing t-shirt. David’s clothes were clearly more appropriate for delivering a conference paper—as he did earlier that day—than rendering him visible amongst the mirrors and glowing moons to your curious gazes.

The Gallery bought the work after the last APT in 2002 and, I’m proud to say, I made a small donation at the time towards its purchase. I love it. You enter the installation through an opaque sliding door, which closes behind you, onto a short catwalk platform surrounded by water. The water forms a reflective surface that works with the mirror-covered ceiling and walls to form the illusion of an infinite space. The various orange and green spheres are lit by the fluorescent purple lights, adding to the sense that you’re hurtling through outer space. You can stare into the distance forever.

Of course, the trick is not to become disoriented and hurtle into the water, a feat made more difficult if you’ve been drinking beforehand as David and I had both been. We were attending the Academic Viewing hosted by the Gallery as part of its programme for the combined opening of APT5 and its new premises. It was the Gallery’s education division that plied us with alcohol and encouraged us to wander amongst the art.

Normally I’d be too rules conscious to take a photo in an art gallery, but there I was, inebriated, teetering on the edge of space, and unduly influenced by David, whose first thought on entering the installation was whether or not a photo could be taken. I had to know too, and that’s how I discovered that at least three could be taken with my phone’s camera. David was also a bad influence on the two other people who were viewing Soul Under The Moon at the time. In the end, we all left the installation giggling like naughty children to the bemusement, I’m sure, of the Gallery staff member presiding over the automatic door.

Here, I should just note that we resisted running through another installation, this one comprised of intricately carved totem-like poles, arranged in a kind of forest. There were signs saying ‘Do Not Touch’, which was difficult, because their carved surfaces were just so inviting. I really wanted to walk amongst them and explore their surfaces with my finger tips. I had to fold my arms and rock from heel to toe, but I did not touch.

I’ll revisit the exhibition and write about it in more detail in another post, but for now, I just wanted to say how excellent it was to meet David and hang out with him for a bit. He’s the first blog person I’ve met that I haven’t already known outside of blogging.
Posted by Kirsty at 10:10 pm

Oh, I love that piece! I didn't realise the gallery had bought it - awesome!

That was a lot of fun, and very deep. Thanks.

Excellent post. I feel as though a small part of me has been there too. That sounds such an excellent installation. I hope it's permanent.

Lucy, in my search for links, I discovered that the installation was made especially for the previous APT and it's one of a series of Infinity Rooms. I'd love to see the others.

Glad you had fun David, me too. I think that's one of the best things about the APT, amongst other things, it has such a sense of humour.

I'm trying to think about how easy/difficult it would be to pack it up, Clare. Not that easy I imagine, which could only be an incentive to have it there all the time. I think the trick for me will be finding a quiet time of day to go so I can spend at least 5mins staring into it, without interruption. Is it too selfish of me to want to post a sign on the door--do not disturb?